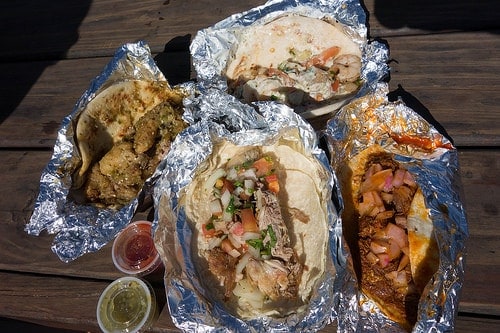 When Revolution Taco opened in January just a few blocks from Rittenhouse Claridge, it wasn't as if the city was lacking for international fare. Yet Revolution Taco seems to have struck a chord with local eaters already, perhaps because it was dreamed up by three food truck owners. The inventive minds behind Street Food Philly, Taco Mondo, and Say Cheese Philadelphia came together to create Revolution Taco, and the results have been just as creative as their original forms of street fare.

The popular duck taco is a prime example of the "tacos without borders" that Revolution Taco touts. Instead of being served in a traditional tortilla, duck tacos come wrapped in scallion pancakes. They're stuffed with tender duck, plum barbecue sauce, ginger-cabbage slaw, and pickled oyster mushrooms, as well as a hint of sesame. Other tacos contain ingredients such as beef tongue and cheek, smoked mushrooms, or glazed pork belly. Opt for a burrito bowl for something lighter, or indulge in a large traditional burrito.